Differences in the level, timing, or location of gene expression can contribute to alternative phenotypes at the molecular and organismal level. Understanding the origins of expression differences is complicated by the fact that organismal morphology and gene regulatory networks could potentially vary even between closely related species. To assess the scope of such changes, we used high-resolution imaging methods to measure mRNA expression in blastoderm embryos of Drosophila yakuba and Drosophila pseudoobscura and assembled these data into cellular resolution atlases, where expression levels for 13 genes in the segmentation network are averaged into species-specific, cellular resolution morphological frameworks. We demonstrate that the blastoderm embryos of these species differ in their morphology in terms of size, shape, and number of nuclei. We present an approach to compare cellular gene expression patterns between species, while accounting for varying embryo morphology, and apply it to our data and an equivalent dataset for Drosophila melanogaster. Our analysis reveals that all individual genes differ quantitatively in their spatio-temporal expression patterns between these species, primarily in terms of their relative position and dynamics. Despite many small quantitative differences, cellular gene expression profiles for the whole set of genes examined are largely similar. This suggests that cell types at this stage of development are conserved, though they can differ in their relative position by up to 3–4 cell widths and in their relative proportion between species by as much as 5-fold. Quantitative differences in the dynamics and relative level of a subset of genes between corresponding cell types may reflect altered regulatory functions between species. Our results emphasize that transcriptional networks can diverge over short evolutionary timescales and that even small changes can lead to distinct output in terms of the placement and number of equivalent cells. 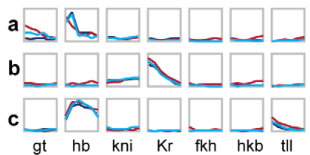