Sets are a universal concept in scientific data analysis. Bacterial species found in a soil sample, enzymes discovered in a biochemical pathway, variants found in a genome, proteins detected in a serum sample by mass spectrometry or genes that are mutated in a cohort of patients with cancer can all be treated as sets. Although the goal of some studies is limited to the identification of such sets, a common task is the analysis of the commonalities and differences of multiple sets by intersecting them. We surveyed figures published in Nature between December 2011 and October 2012 and found 20 figures with a total of 51 diagrams depicting intersections of up to 6 sets.

Sets and their intersections are straightforward to visualize up to three or four sets. If, however, the number of sets exceeds this trivial threshold, visualization of the intersections is a major challenge. 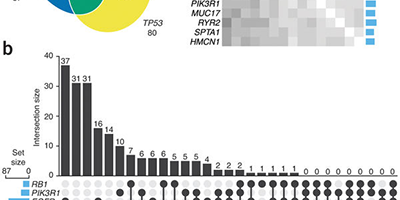