When interpreting data as a graph for visualization, an analyst first assigns semantic meaning to graph concepts. For example, they may choose to represent actors and movies as nodes, and roles as edges. Alternatively, they may wish to represent movies as edges, connecting actor nodes when they collaborate. Data abstraction choices such as these are critical, because different data abstractions can limit—or inspire—different analysis questions, approaches, perspectives, and visualizations.

However, current network modeling frameworks, systems, and databases narrowly define graph abstraction constructs—such as nodes, edges, node / edge classes, supernodes, hyperedges, etc.—in terms of how the data is stored in memory or on disk, rather than semantic, human-driven abstractions. Consequently, the ability of an analyst to iterate on a data abstraction becomes fundamentally limited by the implementation details of data wrangling software.

We present work-in-progress toward a broader framework for modeling network data that is less dependent on its underlying structure and storage. Our goal is to use semantic data abstraction constructs to inform how algorithms wrangle data, instead of allowing algorithmic concerns to define and constrain the semantics.

We also present mure.js, a software library that represents an initial implementation of this framework, allowing users to map semantic graph constructs to arbitrary data structures as metadata, that can, in turn, be used to select, navigate, and reshape the under- lying data. Additionally, we discuss an early software prototype of a visual graph wrangling system based on this library. 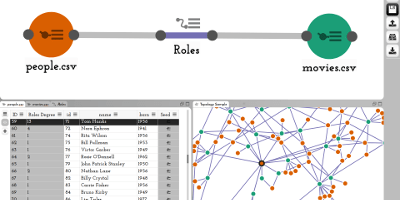